So I knew BADD 2014 was coming up, and my brain has been... uncooperative.  In fact, it has been pretty uncooperative for anything besides reading Marvel fanfiction and carving out random hours of time to spend with my family for about a month now. :shrug: It happens. But a confluence of all three of these things happened over the weekend, and it seemed like too much of a good thing to pass up, so here we are.  Please be warned that this is completely ridiculous and that I KNOW I am stretching the metaphor a little bit too far - OK SO FAR - but... :shrug: It happens. (Also: some spoilers for The Avengers & maybe random comic book knowledge?)

During a sleepover with my niece and nephew this weekend, my (soon to be 8 year old) niece and I were playing with modeling clay while I was making dinner. Mostly, this consisted of her making a thing, showing it to me, and then setting it aside, or asking for help with a particularly difficult part of the construction (making a Bruins 'B' for her brother required a cookie cutter, as neither of us could make a B that would suffice, for example).  But, at a certain point, I'd gotten all the ingredients cooking and was just sort of waiting for things do be done, and so I sat at the table with her and started to make a figure of my own.

I chose the Hulk because a) I know how to make basic figures in clay, b) the green was closest to me, and c) LilGirl and I had been talking & reading about The Avengers just prior to dinner-time. We chatted a bit about Hulk and how he'd become the Hulk (origin stories - not always appropriate for children!), and how he's usually a 'normal' guy, except if he gets hurt or angry or there's dangerous situations going on. She remembered that her favorite part of The Avengers movie is when Hulk  smashes "the bad god-brother" and laughs "Puny god". She even demonstrated for me with the clay in her hand.  I told her how the old TV show of The Incredible Hulk used to make me so frightened I'd hide behind the couch every time poor Bruce Banner changed into the unbelievably large (to then 5 year old me) Lou Ferrigno, but that once he WAS the Hulk, he seemed ok; even nice, mostly... If you were nice to him. And how he always seemed so sad, at the end of the show, walking off down that highway, twinkly, piano-theme music playing behind him, which led us to talk about how hard it would be to make friends if you were the Hulk. I finished up my Hulk as best I could - his face was still not great, but at least his arms stopped falling off - and she finished her sculpture, which she then gave to me. She'd made her brother a Bruins 'B', herself a smiley faced self-portrait, and me, a copy of my wheelchair. I oohed and ahhed over it, and then the next steps of dinner took over, and I asked her to start clearing off the table while I got the rest of the food together and found her brother.

A couple of hours later, when we were finished eating, cleaning up, and playing games, she went to give her brother the B, and I was going to show off my new clay wheelchair, when I looked to where she'd put them aside, and found Hulk, standing in the chair. LilGirl explained to her brother that she'd made the chair, and I'd made Hulk, and when he asked, "Why's he in the wheelchair - he's a superhero...?" She made a face like he was being ridiculous and answered "So? Superheroes can have wheelchairs -" When he went to say something else she looked to me "Can't they Auntie?"

Before I could respond her brother butt in (the two of them are not great at letting each other finish sentences, but that's what siblings are for), rolling his eyes: "Of course SUPERHEROES can, but HULK doesn't use a wheelchair, because then he wouldn't be Hulk." Now they were both looking at me. Um... OK.

"Yeah, I mean, of course: Superheroes DO use wheelchairs" I rolled into my room and brought out my Oracle trading card, showing her the lovely and super-amazing Barbara Gordon in all her technological splendor. "We've talked about Oracle before, right, how she used to be -" "Batgirl" her brother put in. "Right." LilGirl took the card, gave it back - "Yup, I remember. But Batgirl is not an Avenger, right?"

I laughed and thought about explaining how Batgirl isn't even in the same universe as the Avengers (mostly), but... thought better of pushing my luck. "Right. But... Um Hawkeye - in some versions of the comics: He's deaf, so he has a disability and is an Avenger. And... " Nope: not going to explain PTSD to an almost 8-year-old, but... "And Iron-Man, in the movies he has a panic attack, and sometimes that can be a disability - anxiety disorders."

"And I guess it isn't exactly super-normal that you change into a big green monster when you're angry either" suggested her brother, ALMOST apologetically. "Well, I'm not sure disabled and normal are exact opposites there, bud" I corrected him gently (because you try and correct a 14 year-old any other way), "but yeah, I think maybe Hulking out could stretch into the disability category if we really tried, because it's something in his body that he's not always got control over and a lot of disabilities -" I gestured to myself "are kind of like that. Cousin Sara once called her seizures Hulking out." (Our cousin has epilepsy.)

"Plus, how you said that sometimes the Hulk - or the doctor who is the Hulk - gets so sad because people don't understand him? That's the same, right?" Lil Girl offered and I was kind of stunned. Because -although we talk about it a lot, how people don't always understand about me or how much it can hurt when you want to do things but you just physically can't - I wasn't sure she really ever got that part of it before. Shows what I get for underestimating her. "Um, yeah, kiddo - I guess that would be the same kind of thing, really. Sometimes being sick can be wicked lonely." Her super-sweet brother shoved his chair closer to mine and put his head on my shoulder.

"So see: Hulk could need the wheelchair." LilGirl gloated at her brother, never one to let an opportunity to best him pass. I rolled my eyes at him, because he's older and we share the experience of little sisters, if nothing else. And then I said "He could: but even if he didn't use the chair, he could have a disability. Lots of people do. You can't always tell."

"Well, this Hulk needs a wheelchair." she said, showing it off. "He looks good in it too," I agreed, "although you probably could have told me that before I spent so long making his legs strong enough to hold him up, you  fruit loop."  She laughed, and we got ready to watch a movie and call it a night.

While I realize that not everyone will be on board with the whole Hulking out/disability metaphor (and I'm not sure I'm 100% behind it myself, as my brain cells would need MUCH better focusing skills then they are currently capable of), when I was thinking of BADD, and what the hell I was going to write about, it was this conversation that I just kept coming back to.  There's a lot I could say about it - I could talk about the power of representation, and having books and media that accurately portray characters with disabilities in a way that helps CHILDREN especially create a more realistic view of their actual world.  I could go on and on about how great it feels that some of what I'm actually hoping these children in particular are learning is actually getting through (Empathy! We can haz it!).  I could definitely ramble at length about how much I miss Oracle even though I love the current run of Batgirl.

But really, I think, for me, this was about how often we underestimate what kids can understand, and how they understand it. To LilGirl, there was no reason that Hulk couldn't both be canonically Hulk and use a wheelchair: at eight, that limit doesn't exist for her. By 14, her brother, on the other hand, has more experience with the actual Hulk's story, and knows that (in canon) Hulk would never need a wheelchair. Which was also fine, because, to him, having no control over your body whenever you get angry seemed like a disability in and of itself. Sure, neither used exactly the terminology I would have preferred (normal =/= non-disabled, for example), but that's small potatoes compared to the big stuff. The big stuff here being that neither one of them thought it was even the tiniest bit absurd that Hulk - whatever his disability might have been - would be a superhero. There was just enough "Well why the hell not" in both of their attitudes to make me proud. (And not enough "But they're special BECAUSE OF their disability" to make me worry about running headfirst into super-crip territory.)

Because WHY THE HELL NOT??? is basically how kids work, and we should do a better job of living up to that, all around.

PS: Here is our Hulk, complete with his chair. My favorite is the push handles in the back of the chair, because I like to picture Captain American rushing into battle, pushing Hulk's chair while Hulk smashes with Cap's shield. 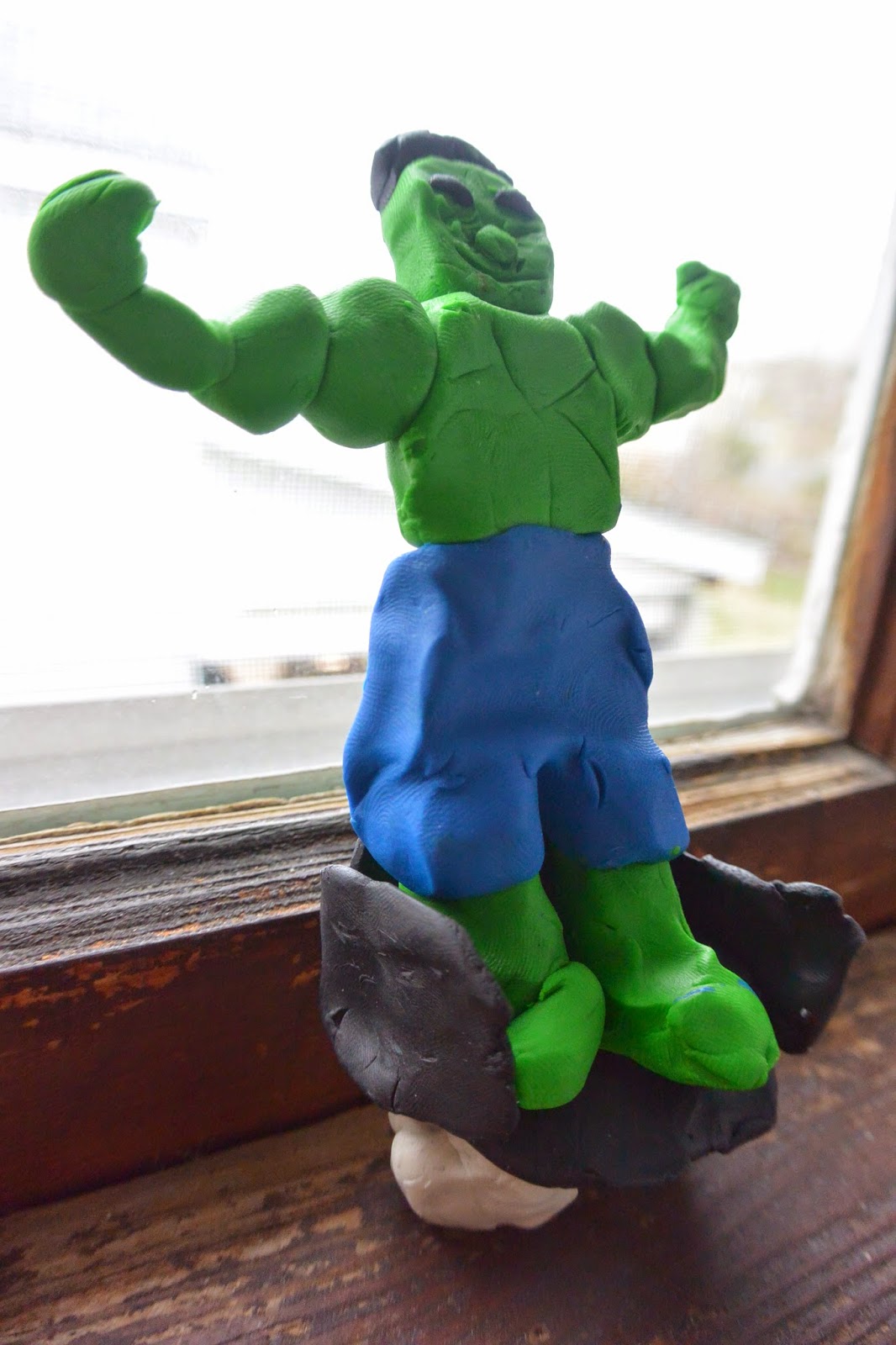 PPS: In case you haven't heard it, here is a link to The Lonely Man, which is the actual title to the theme song from The Incredible Hulk, which I didn't know until right now. The song still gives me the sads, though.
Posted by Never That Easy at 7:00 AM 2 comments: