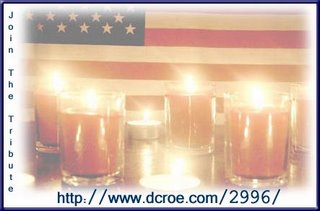 I'm participating in 2996, a tribute to the individuals whose lives were lost on September 11, 2001. I'm not going to turn this into a political rant, or even my own personal memories: It's a post dedicated entirely to one person: Nestor Julio Chevalier. 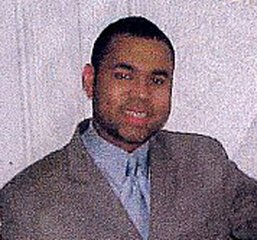 Nestor, age 30 when he died, worked verifying trades at Cantor Fitzgerald in the World Trade Center. Here's what little information I was able to find out about him:

"Nestor was the type of person who was a friend to everyone. He always had a smile on his face and you could not be in a bad mood around him. I enjoyed talking to him and hanging out after work. We both worked downtown in Brooklyn. He was so dedicted to his parents and his brother, not typical of a guy in his 20's. "(From 9-11 Heroes)

And on a different tribute page he was described in this way:

"Allow me to say that truly, he was the most nicest, friendliest and classiest guy you could ever meet.

The thing that I most remember about Nestor is his easy going personality. He had a great sense of humor and a wonderful style for clothing. I pray every night to Nestor and I ask him to give me the strength to get through every day.
September11victims.com


The New York Times did a piece on Nestor and his family shortly after the attacks, the title was "Inseperable Brothers."

Nestor Chevalier always let his kid brother, Maurice, tag along. Though the brothers were five years apart, they were inseparable growing up in Washington Heights. They worked out together at the gym, and danced to salsa at the nightclubs. They even moved out of their mother's house into an apartment of their own in the neighborhood. "We were the best of friends," Maurice said. "We did everything together."

Nestor Julio Chevalier, 30, verified trades at Cantor Fitzgerald and had planned to marry his girlfriend of nine years, Lillian Fermin, in October. He loved to tell stories about his life, often exaggerating the details for even bigger laughs. He found a rapt audience in his family and friends. Just last month, Maurice took Nestor to a salsa club to celebrate his big brother's birthday. Maurice danced all night.

"I miss him dearly," Maurice said.

Profile published in THE NEW YORK TIMES on September 25, 2001 NYT


It's the things that I couldn't find out about that I wish I could tell you all today. All those little things about him that his friends and family are still missing today, 5 years later. I've told you what I could find out about him, just by doing some searching, but it wasn't the whole of him.

Think about your brother: the way he points his finger at you for an E.T. touch instead of giving you a hug. The time he got you into so much trouble by convincing you that dog bones were good for people too. The way he laughs, or looks at you with one eyebrow raised. All the little things. That's what Nestor's family is thinking about today.

As we should be.

To those who were touched by Nestor in life, I can only say I am sorry.

A beautiful tribute to him, you did an awesome job.

So many wonderful lives cut short.

mine is up also.

sounds like he was a very special guy. thank you for a moving tribute.

mine is up at my blog.

Thank you for sharing, this is a wonderful tribute.